This special edition release will officially drop on February 10th, 2018 in limited quantities.It is a exciting news for the fans .

Nike officially announced Paul George as its newest signature athlete last year, introducing the PG 1 sneaker with an attractive colorway inspired by his character-defining hobbies. After a successful first chapter, the PG 2 is ready to hit the market with yet another dazzling iteration in collaboration with Sony Playstation; this ongoing partnership between these two major brands comes to life again with some epic details specific to the gaming console franchise, with an added bonus of an unlockable theme by way of a secret code on the shoes. Paul’s been a Playstation loyalist ever since his father surprised him with a PS2 for Christmas ages ago, and he considers himself one of the most obsessed gamers in the NBA.

What’s new with Paul George’s next signature shoe is both obvious and hidden. For one, the shoe doesn’t feature a strap anymore, and the interior bootie has been replaced for a classic tongue construction. The outsole traction has been spaced out for better grip, and the Zoom bag is 2 millimeters thicker and sits directly under the foot. All of these substantial changes deliver exactly what Paul wants and needs in his shoe. There are several discoverable elements that pay tribute to his close-knit family, who is regularly present during Paul’s design brainstorms with Tony. Furthermore, the right heel of the shoes references the tragic injury Paul faced in 2014, a story that will continue on with the PG signature line as a reminder of his epic comeback.

Launching on February 10th is an otherworldly colorway inspired by Paul’s favorite gaming console legacy, the Sony Playstation. The black and blue upper seems to reference the colors of the Playstation 2, which Paul received as a Christmas gift from his father ages ago, while four key colors found on the signature shapes on the controller buttons decorate the rest of the shoe with speckled midsoles, lace eyelets, and custom insoles. You’ll see Sony’s logo on the left tongue, while “PG13” is written in one of their typefaces.

The shoe features a host of PlayStation-specific nods, including a light-up tongue and more. “We worked directly with the PlayStation team on every aspect of this shoe. One thing that they provided, which was really cool, was the starry graphic from the dynamic theme that will be available for your PlayStation 4 with a code from the shoe. It’s a beautiful graphic, so we made it the sock liner,” notes Hardman.

While the PG1 featured bootie construction and a prominent forefoot strap, the design of the PG2 favors a more traditional tongue construction. However, George still wanted a tight lockdown to be a hallmark of his line, so to solve for the switch, Hardman developed what he calls “dynamic wings” at the forefoot. While this offers the same level of lockdown as the prior system, the new aesthetic improves the overall fit. “It also eliminates some of the issues we had where the strap might be too long for narrow feet,” Hardman explains. 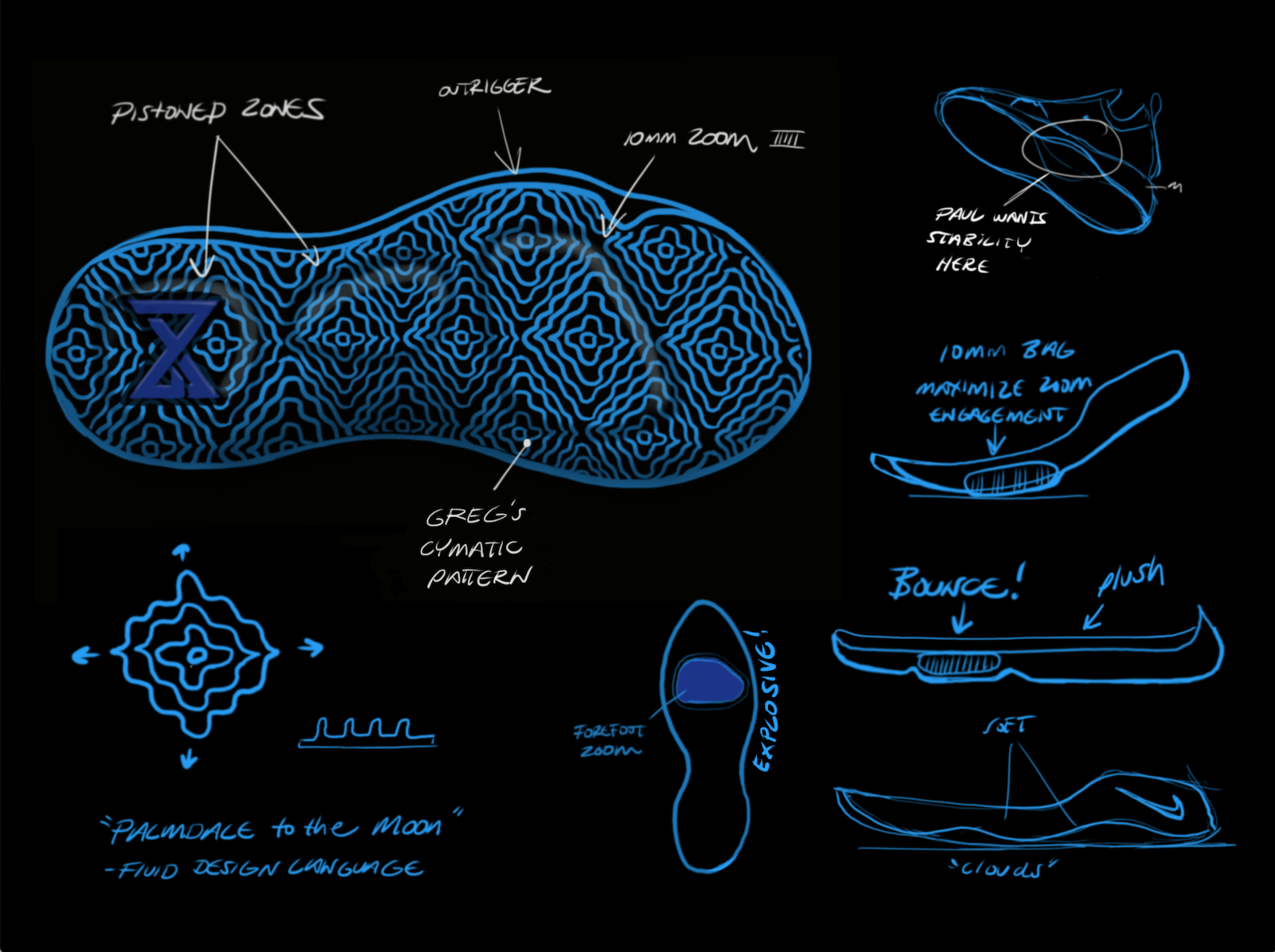 The PG2 features a larger Zoom Air Unit than its predecesor.

One of George’s favorite quotes is, “Don’t tell me the sky’s the limit when there are footprints on the moon.” It not only reflects his path from small-town Palmdale, California, to the NBA but also reminds that a first step is critical to his success on both sides of the ball.

“My love of basketball clicked early. I was crazy about the game. I would wake up early to dribble, playing outside barefoot and running up and down my street in hundred-degree weather with a backpack full of rocks trying to learn how to get more bounce,” remembers George. “I used to do those crazy things because my ambition was not just to play in the park or in the streets; I wanted to play at the highest level.”

Now in his eighth year in the NBA, George’s early work has paid off. However, there remains room for improvement, and that manifests in the PG2 via a new underfoot experience that’s predicated on responsiveness and feedback.

“We increased the size of the forefoot Zoom Air unit to 10 millimeters. And, he’s standing right on top of it now, whereas in the PG1 there was a little bit of foam between the unit and the foot. So all the way to the ground he’s got that full Zoom Bag and that really gives him propulsion in the forefoot,” explains Hardman.

Any player who wears the shoe can expect enhanced lockdown, responsiveness, and improvements to overall traction.

Ultimately, the PG line isn’t just for George. With Hardman, PG works to find solutions for him and also for “the up-and-coming guys.” Given the number of other pros that embraced the PG1, the duo seems to understand the intangibles of a good on-court sneaker.

“I’m really excited, more so again for the performance that it’s going to give guys that follow me and are trying to get to the NBA, I’m most excited for those guys to get a chance to wear them and be in them and help them with their careers. At the end of the day, that’s what I want,” says George.

Aside from lockdown and responsiveness, enhancements for the PG2 also include improvements to overall traction. “Players are going to get everything that they loved in the PG1 plus a lot more,” George says. 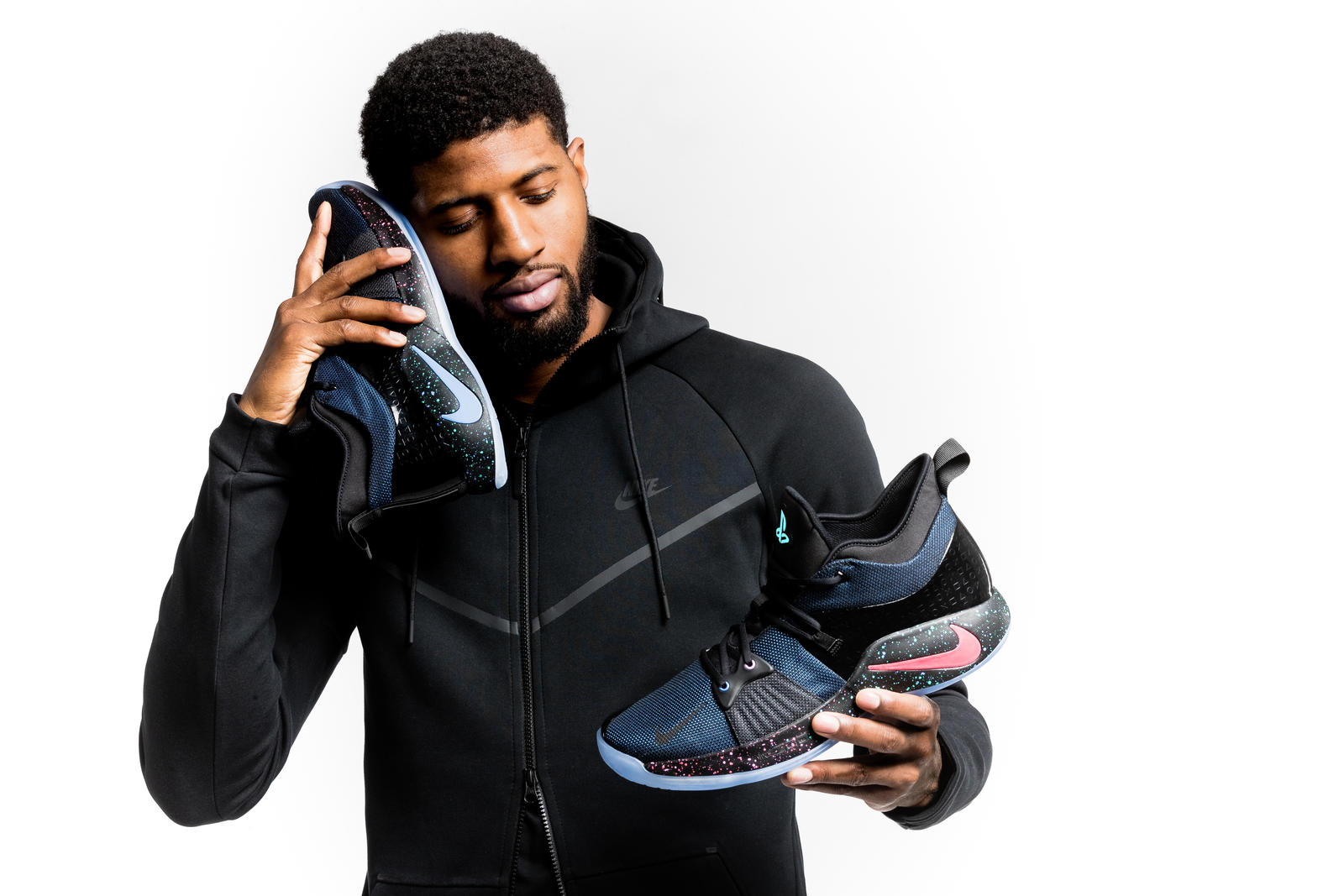 George begins his challenge to shut the competition down in the PG2 PlayStation colorway today in Cleveland.

Both George and Hardman know that design is only one part of the equation in signature shoes — George’s performance matters. The namesake athlete shoulders a responsibility to prove he deserves a signature shoe, and that his ideas about what makes a sneaker work in the toughest conditions of his sport stand strong.